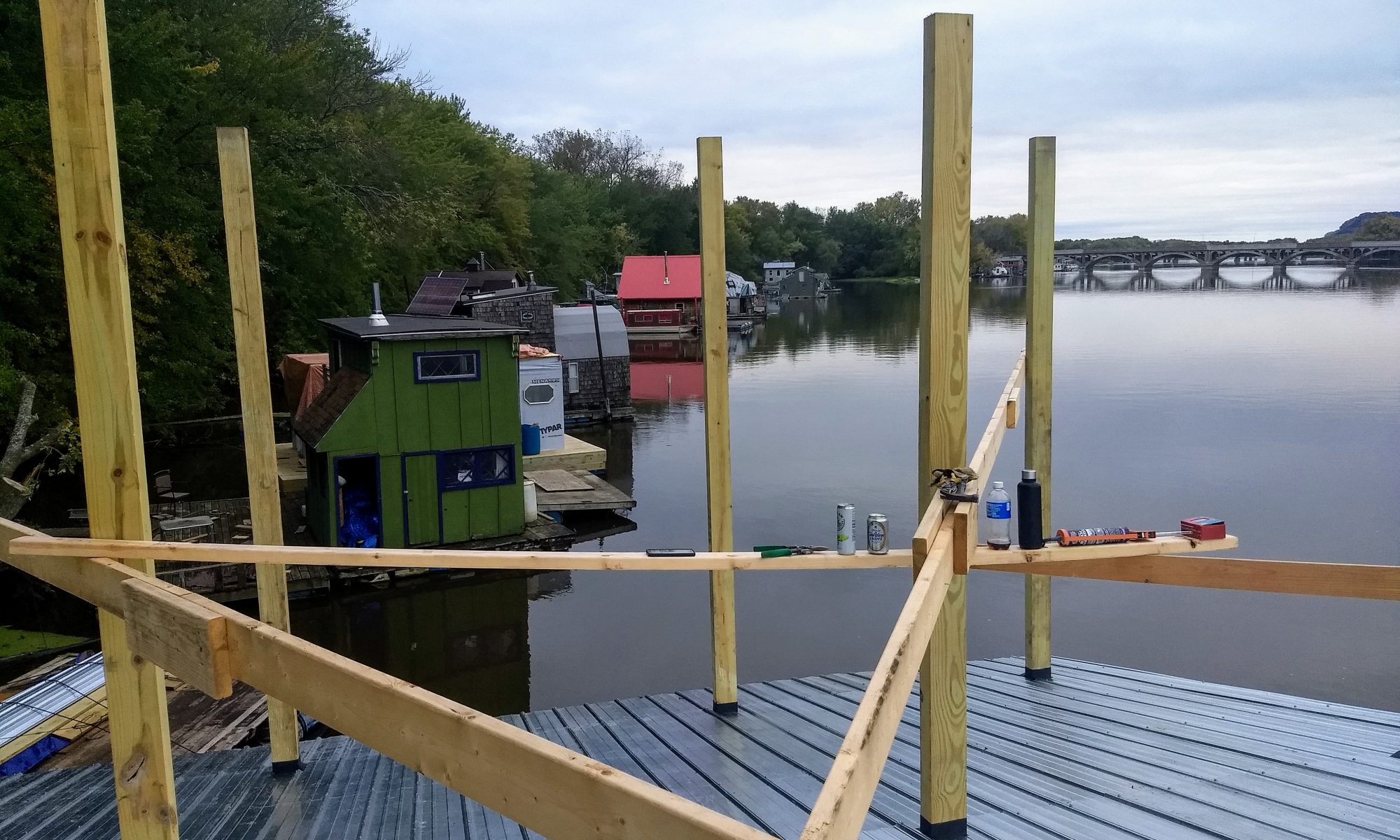 Oh, hey there. I do realize that my last post was on June 27, 2018. As my GrandPapa Larson would say… Uffda. If I had fans of this blog who knew me in no other way than as dedicated online readers, those readers might believe that Michael and I abandoned the boathouse project, got swallowed by the unforgiving current of Old Man River, or decided “ya know what, forget about this little life on water and woods, let’s move in to a high rise and focus our energy on interior design and the Food Network”. Well, all my loyal online fans out there, breathe easy. None of the above have occurred, although I do really enjoy the Food Network. It’s really less about the network and more about the food; I love food. Anyway, I guess it’s good that I don’t have a horde of assuming internet fans but rather real life friends and family who take a moment of their day to see what little old me and crazy Michael are up to now. Well, my dearest humans, allow me to tie up some loose ends and update you on where we landed on the five month old cliffhanger from June 27, 2018- that boathouse. 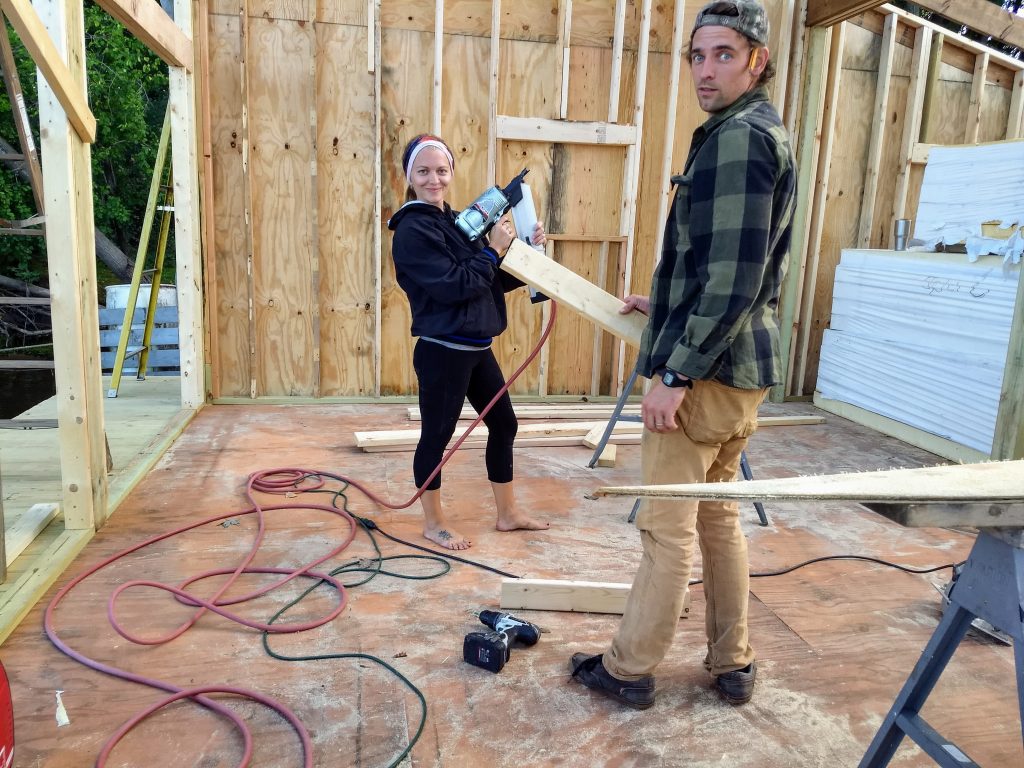 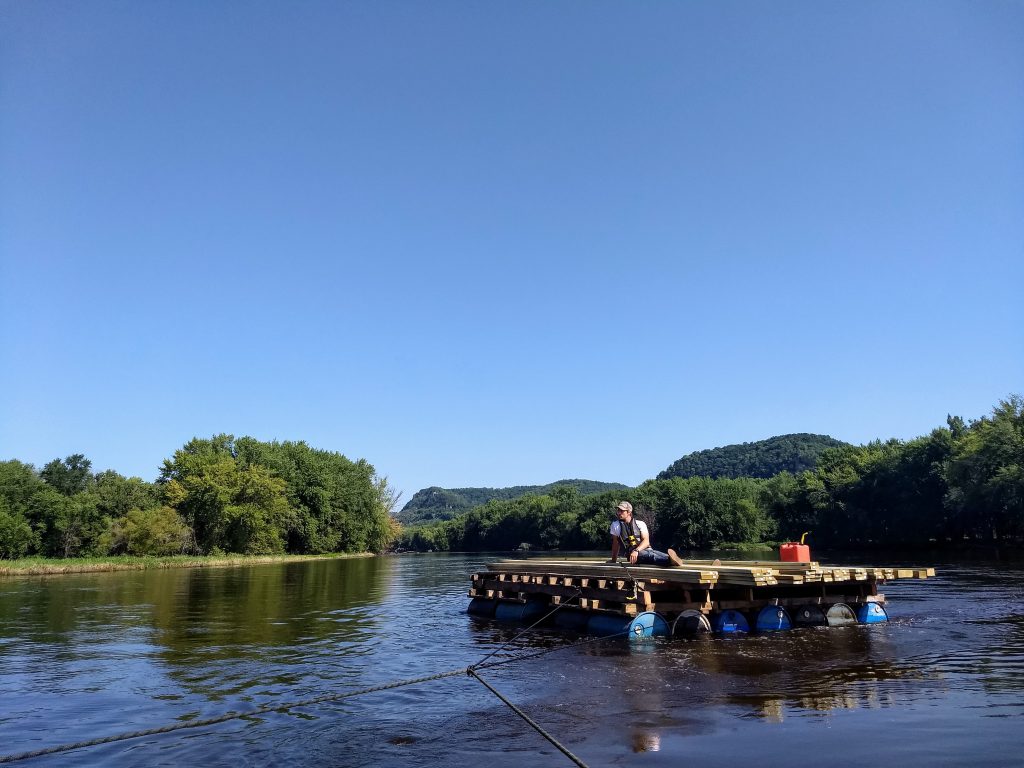 Boathouse Build Month Three (August). I kick myself now for not writing notes as I sift through my brain catalog of memories that happened five months ago. It’s funny what your brain holds on to though- less about the construction materials, the building plans, whats, whens, and hows, and more about the feelings, the sore muscles, the visitors, the joy. Actually, I guarantee Michael’s brain processes this month entirely differently. His rendition would include a bunch of numbers and timelines, and I just do not have the right energy to be transcribing that kind of concrete information right now, so I will proceed with my less useful version: 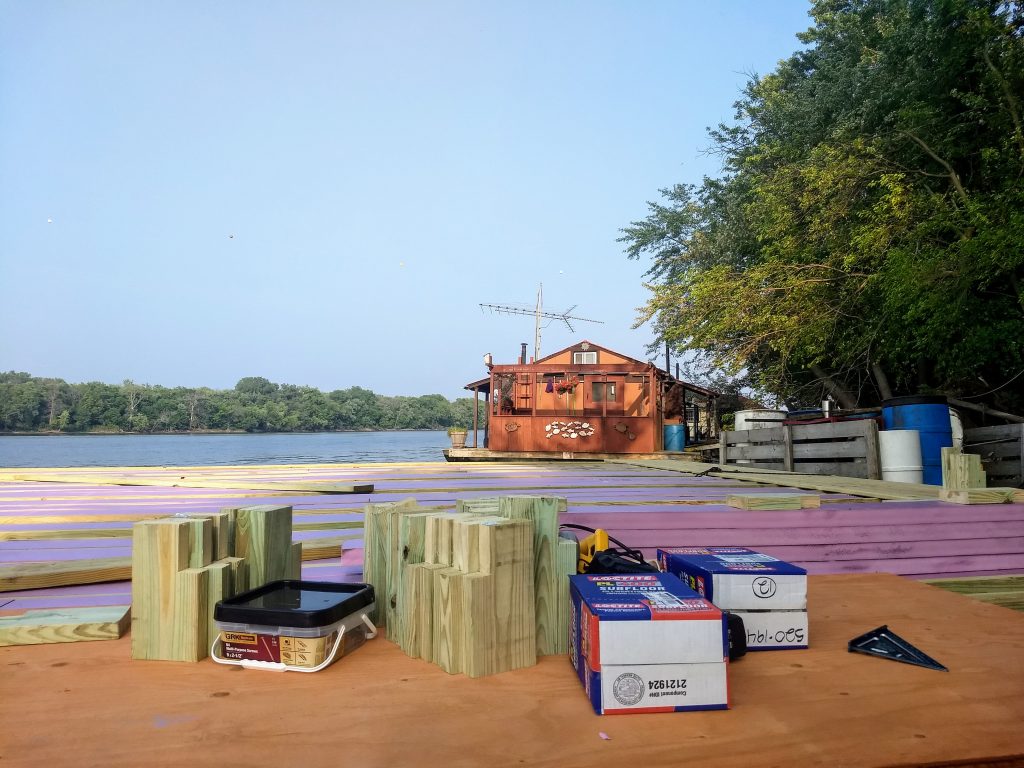 I vividly recall how the feeling of the Mississippi River air changed from dawn to dusk. It was so crisp in the morning- energizing and cool. It paired nicely with the hot coffee that radiated through the thermos I held tight to my chest as we darted downstream via boat to misty Latsch Island. 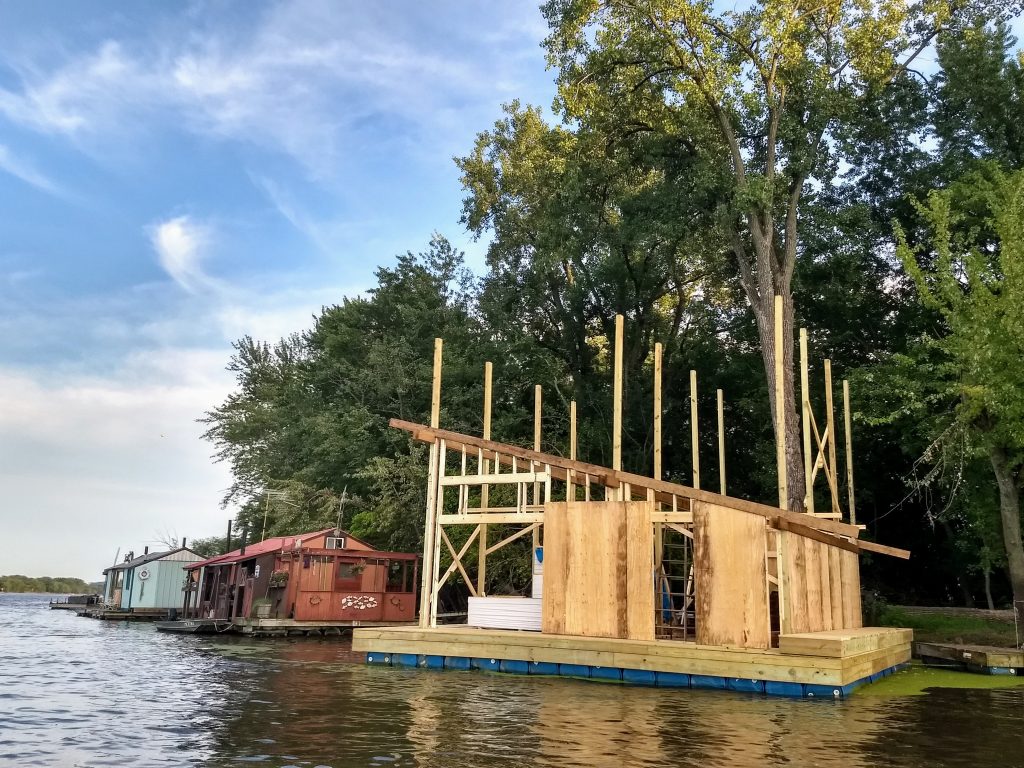 The cool morning air settled over the warm Mississippi water like it was trying to shake it awake it from it’s deep slumber. The river resisted, staying calm and centered. The water only livened with the weekend boat traffic many hours after our start time. Boats would cruise by mid morning eager to find a sandbar on which to spend a fine summer’s day. The waves would frequently rock our construction site and a small piece of me would get frustrated, like “hey, can’t you see we’re working here!”, but then I’d laugh at myself (internally, because lol’ing would just be weird) for expecting the boats to know that there’s a little construction site over here dealing with their waves. Interruption by waves- a unique factor indeed. 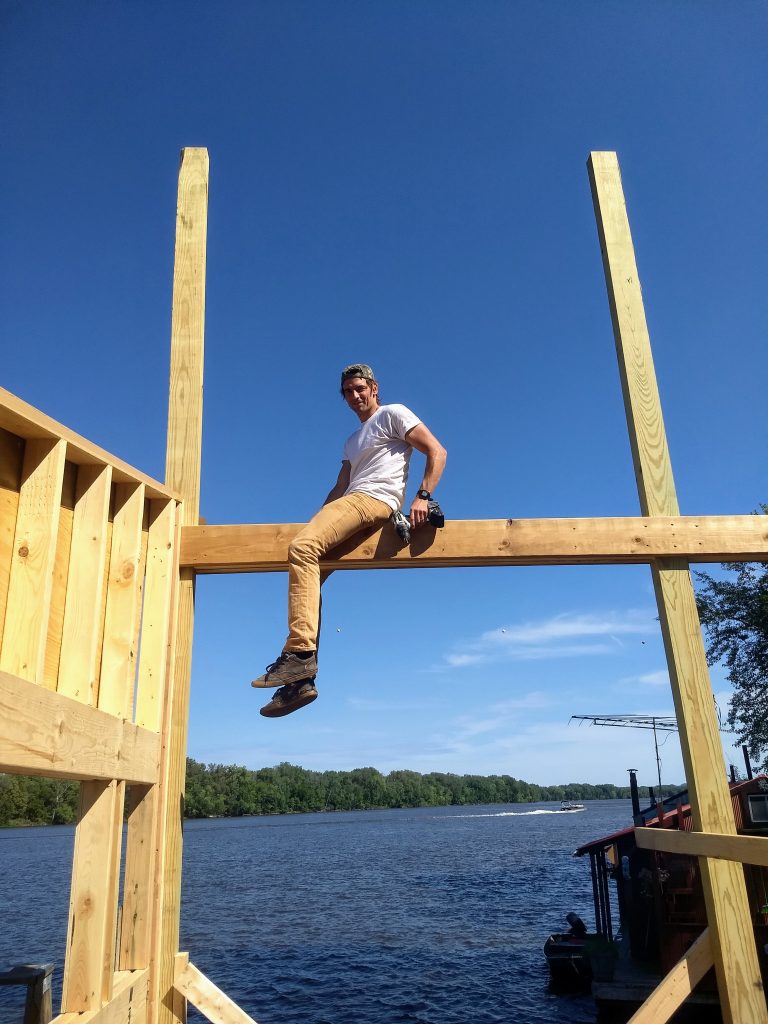 As the sun heightened, it saturated the sky before it permeated my skin. With the sun high in the sky, the day’s hunger would kick in, and we always forgot to pack food. Over and over though, Mom to the rescue with some good sandwiches and cold drinks. 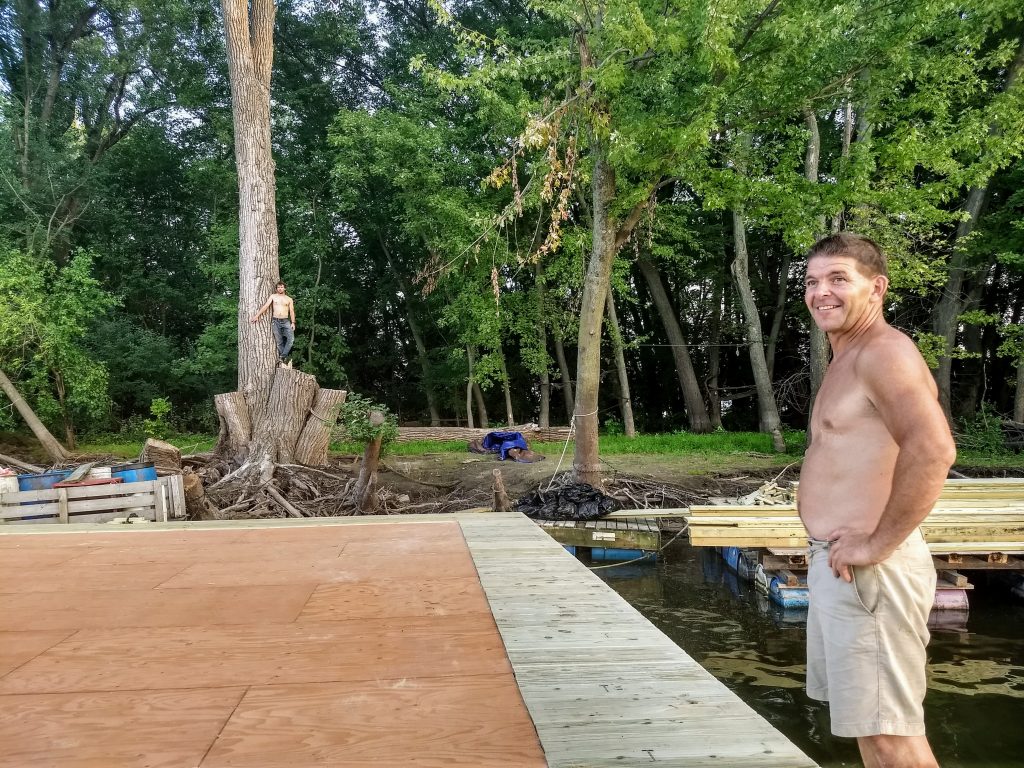 In the afternoon, the work would become more playful, like we had settled in to who was doing what and now we could afford the energy to be goofs.

The summer afternoons carried youthful nostalgia for me. A brief touch of wind, obscure smell, or splash of the river could easily transport me back to dirty kid Chels climbing trees, swimming in the creek, playing in the woods, and running barefoot everywhere- grass-stained from head to toe. I look down at my bare feet here, tanned by the sun and as dirty as ever. They are happy to be like this again- useful, playful, strong. 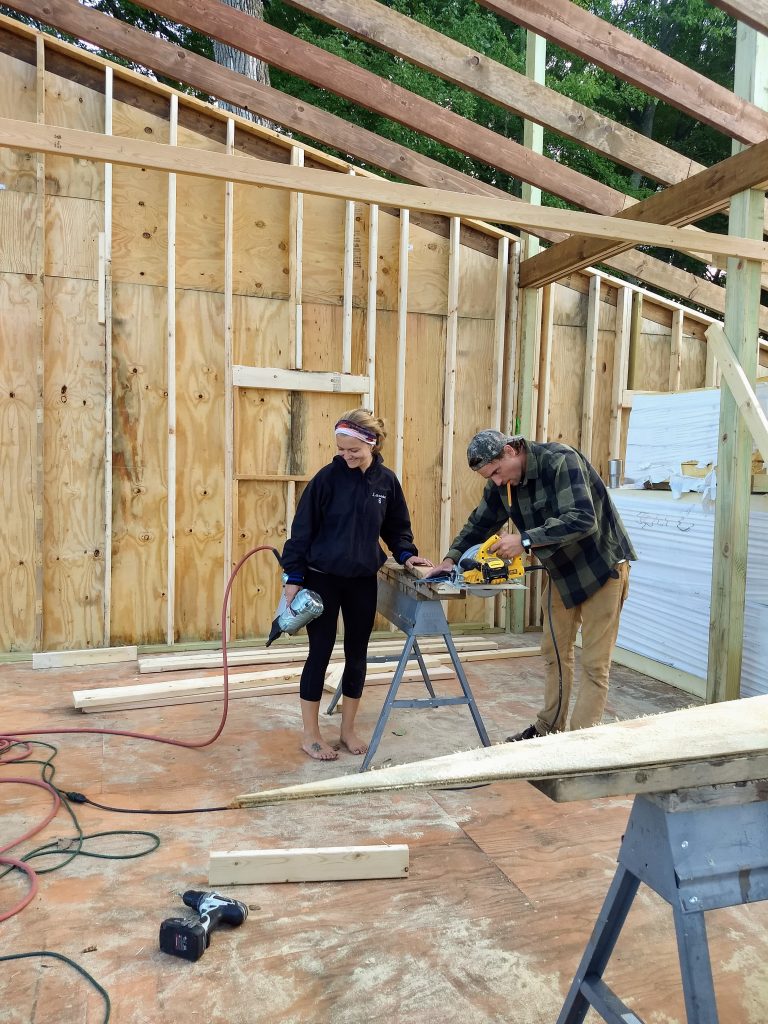 In the evenings, the river carries the warm air like a heavy blanket, tossing it across me as I move around the floating platform. The air became lighter with each passing hour until it feels cool, the day’s heat stripped away with the sunset. The sun would set fast at night. On many days, too fast. On other days, I would thank the sun for rushing us as my dear husband would never stop working until every inch of it had had dipped beneath the upstream horizon. 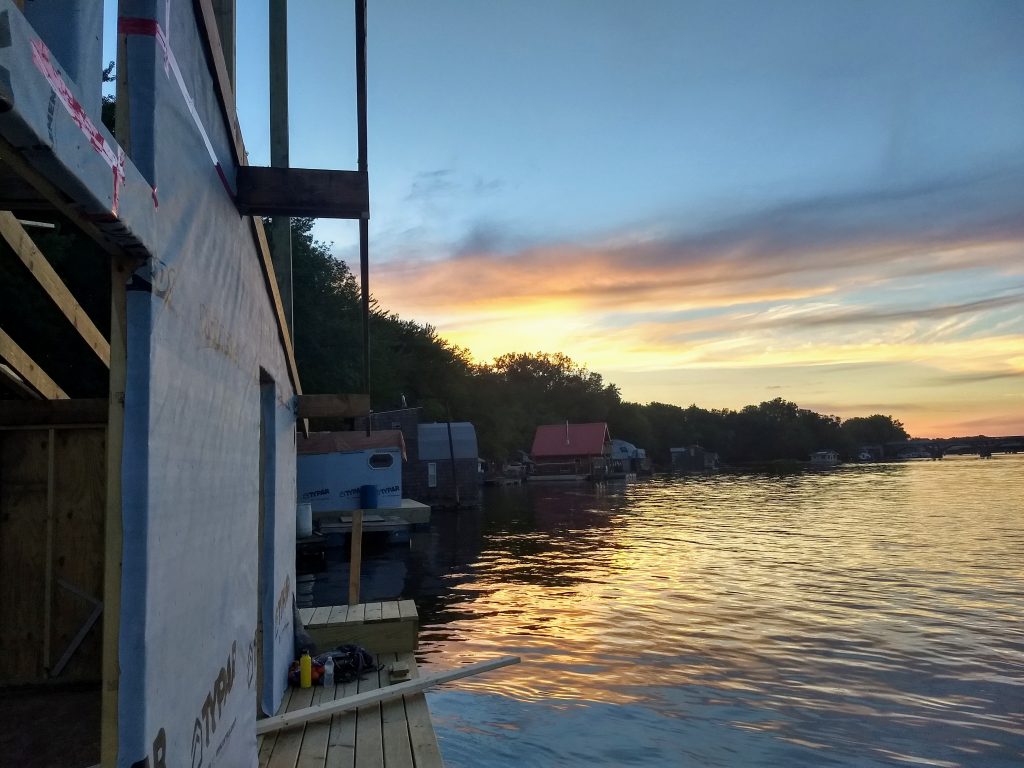 Our eyes adjusted, and finally, when we could see no more, we hopped in the boat to head home. It was then that we saw our progress from the river, from the eye of a jumping fish or a hungry eagle. This moment, looking back at the now sleepy island where our hard work and dreams lived, was my favorite part of the day. 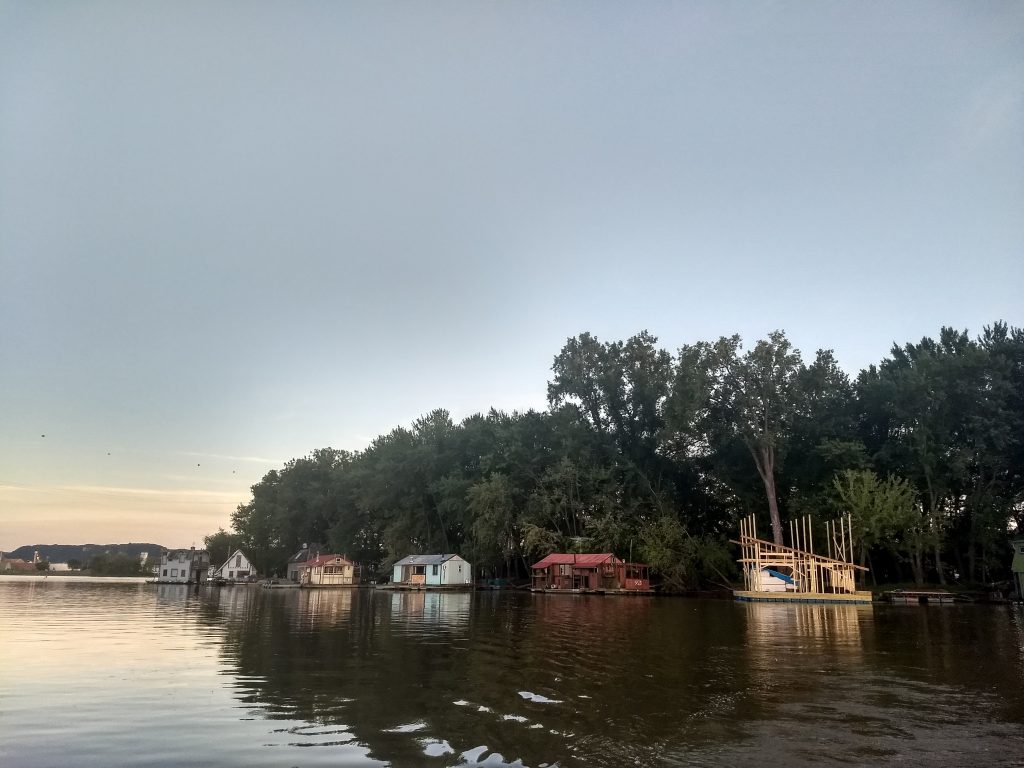 I reminisce on the long day of attaching deck boards with Pops. It was a tedious task and something that I thought would only take a couple of hours. It took all day. It was a test of patience, something my dad excels at and something I have no business pretending I have. I loved this day with my dad though. We talked about small things, funny things, thoughtful things, and sometimes we didn’t talk (that’s actually his specialty). We were simply content and just really happy in this beautifully mindless pursuit of deck board application. 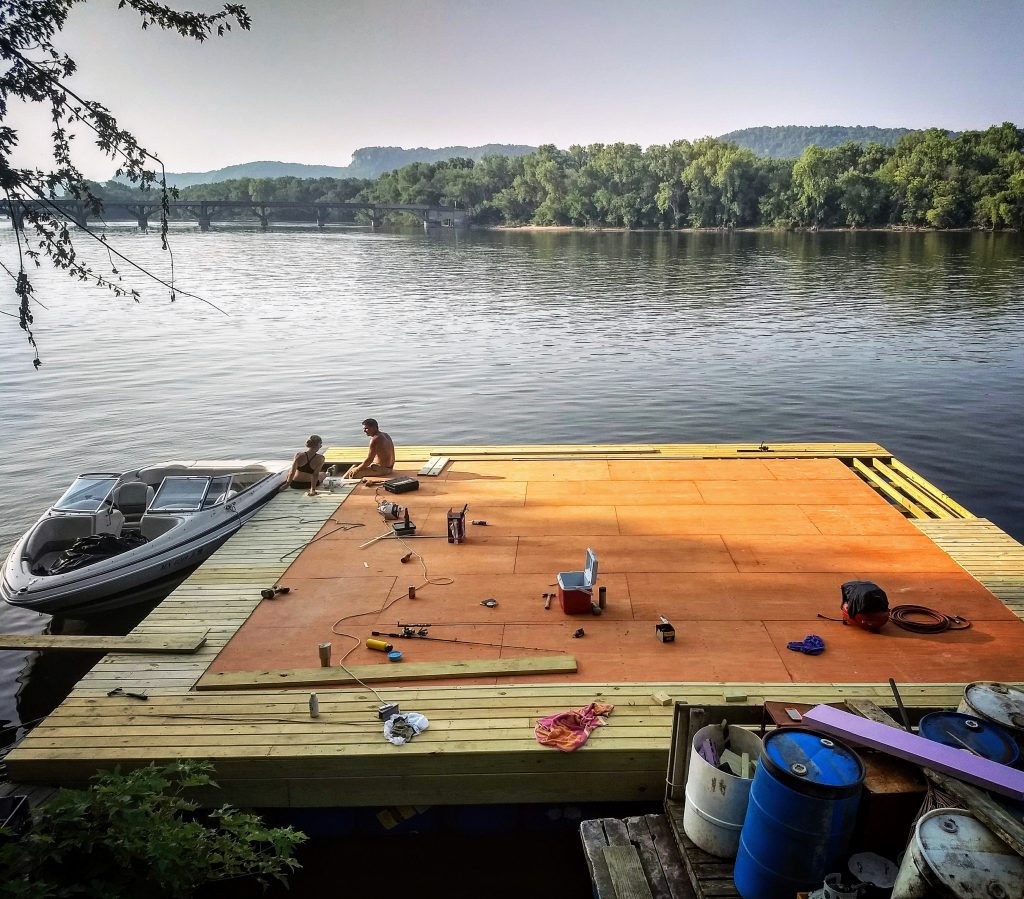 I delightfully recall a finished platform (barrel racks attached, insulation in, plywood over, deck boards on), and Michael and I’s celebratory jump in to the river. It was particularly hot that day. It was a long day that included cold drinks, fishing breaks, and music to keep spirits high and dehydration at bay. Brother Sean jumped in too and took little nephew Hank in for his first river swim; he hated it or maybe he hated the very over-sized life jacket. Like it does for his aunt and his mama, the river will someday evoke all the good feels of a childhood summer. 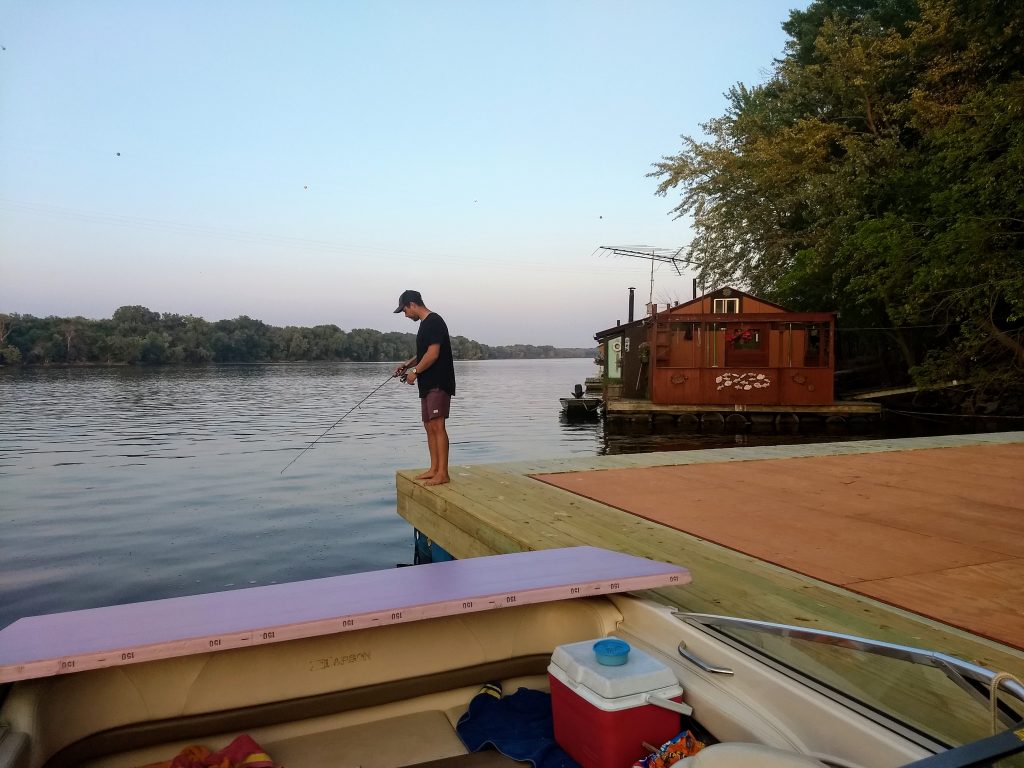 I remember neighbors stopping by- Gerty bringing us cold La Croix in his runabout. Friends and family stopped by to work or laugh with us, and strangers stopped by to ask what the heck we’re doing (always a great question). The visitors were fun. They gave us a chance to take a break, share ideas, and have a chuckle. 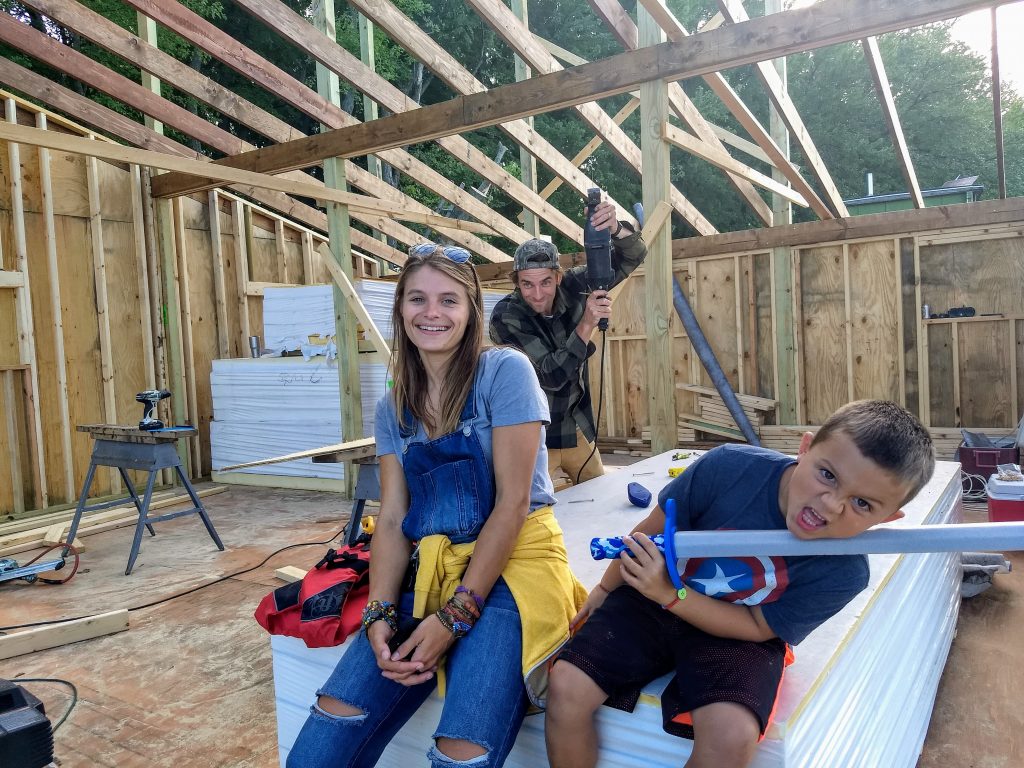 It was a month of long and sweaty days back to back on a floating construction site that relied heavily on at least okay weather and good-to-the-bones people. It was hard work. It was laughing, arguing, saying a lot or saying nothing at all. It was planning and improvising. It was mistakes and accomplishments. There were minor injuries, sketchy maneuvers, second guesses, lots of Menards stops and boat trips, and some of the best times I’ve ever had. 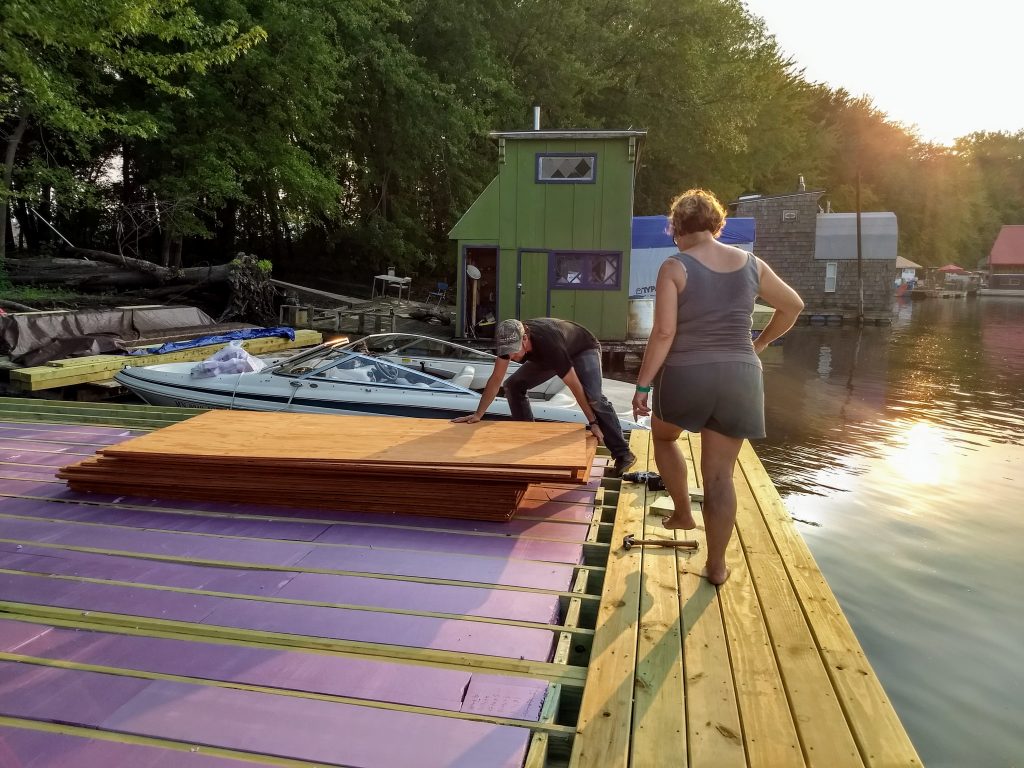 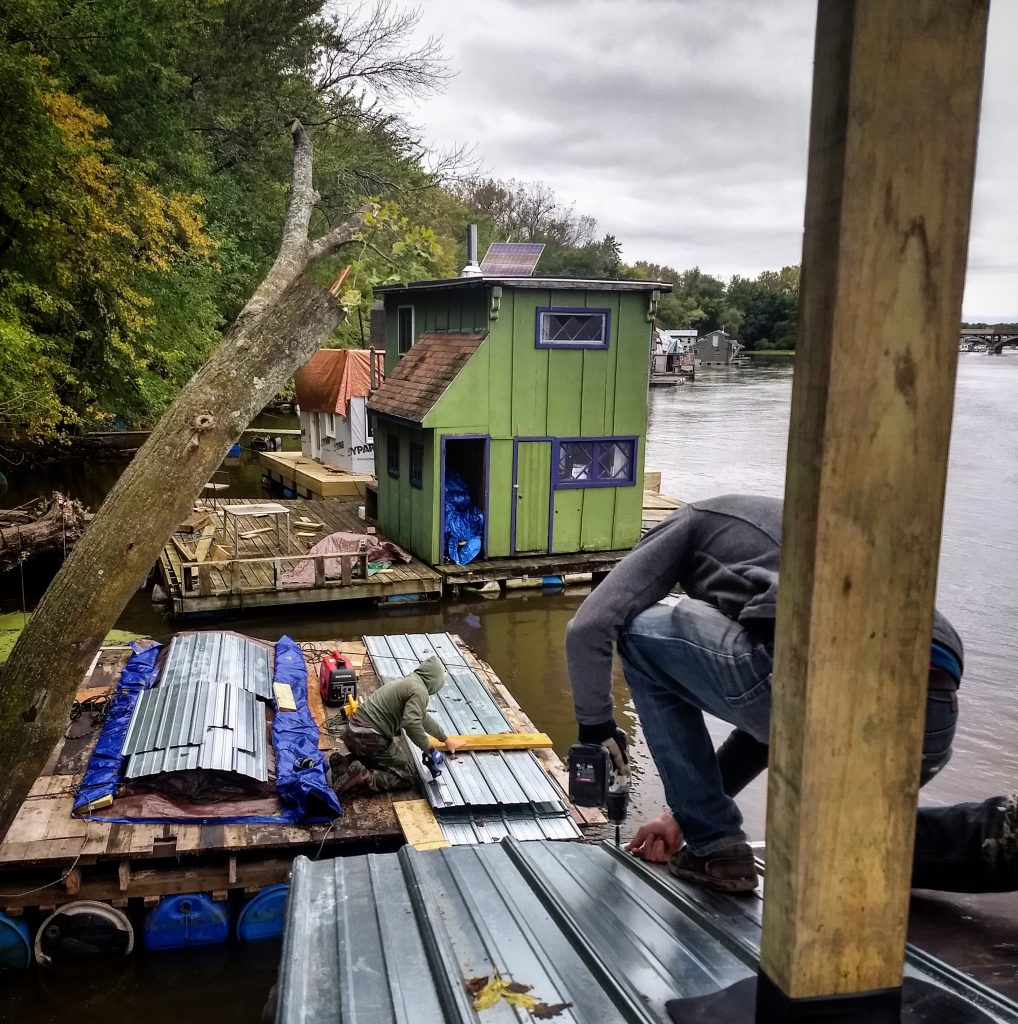 Michael and I are thinking about the boathouse around the clock, and any moment we can be there, we’re there. We know the windows, doors, and roof need to go on before winter yields it’s mighty middle finger. With the impending freezing waters, we will lose our shuttle boat capability. Oh Minnesota, the constant dance we have with your tricky seasons; never allowed to play coy with the elements. 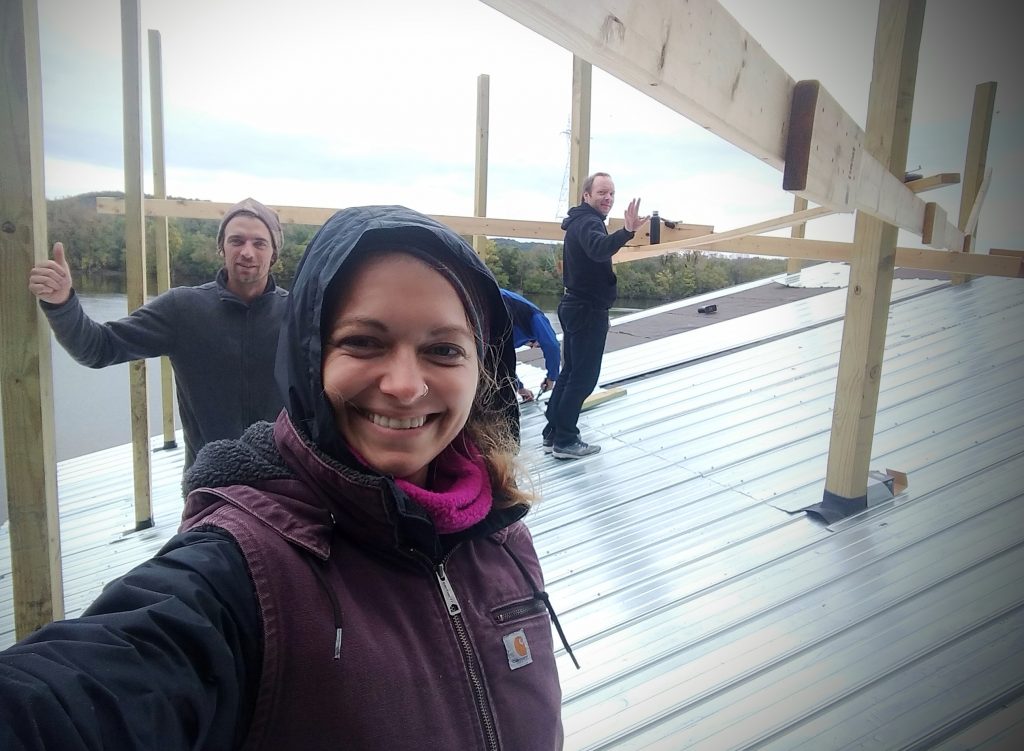 But guess what… with a little help from our village of good-to-the-bones people, we did it! The boathouse is closed in, tied meticulously to shore, and left to the wild of winter. 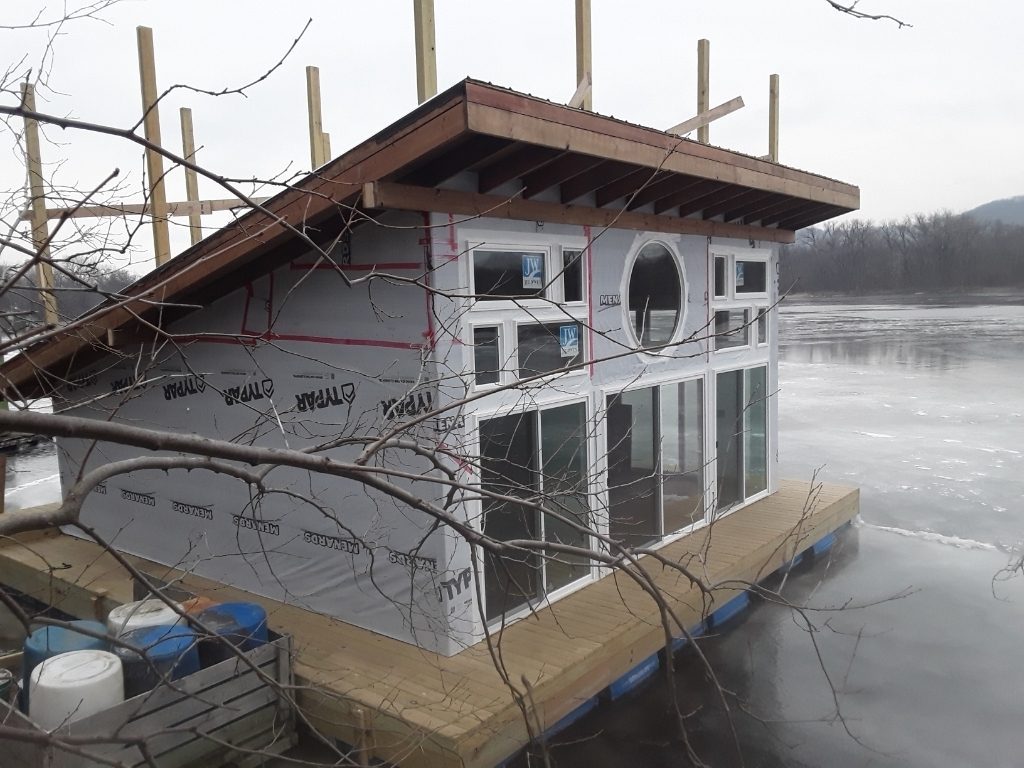 Stay tuned for the next post in which it is fall/winter and one of us purchases a 116 foot fire tower on an online auction for a grand total of five dollars. If any of you are thinking, “wow what a deal, great idea” (which I highly doubt you are), please understand that this steel tower must be manually removed from it’s Wisconsin ridge within 90 days of purchase and during a season when a coat of frost, or if we’re really lucky, a blast of snow settles on this big, huge, heavy, massive, overwhelming, sturdy, seemingly permanent structure. As GrandPapa Larson would say… UFFDA. 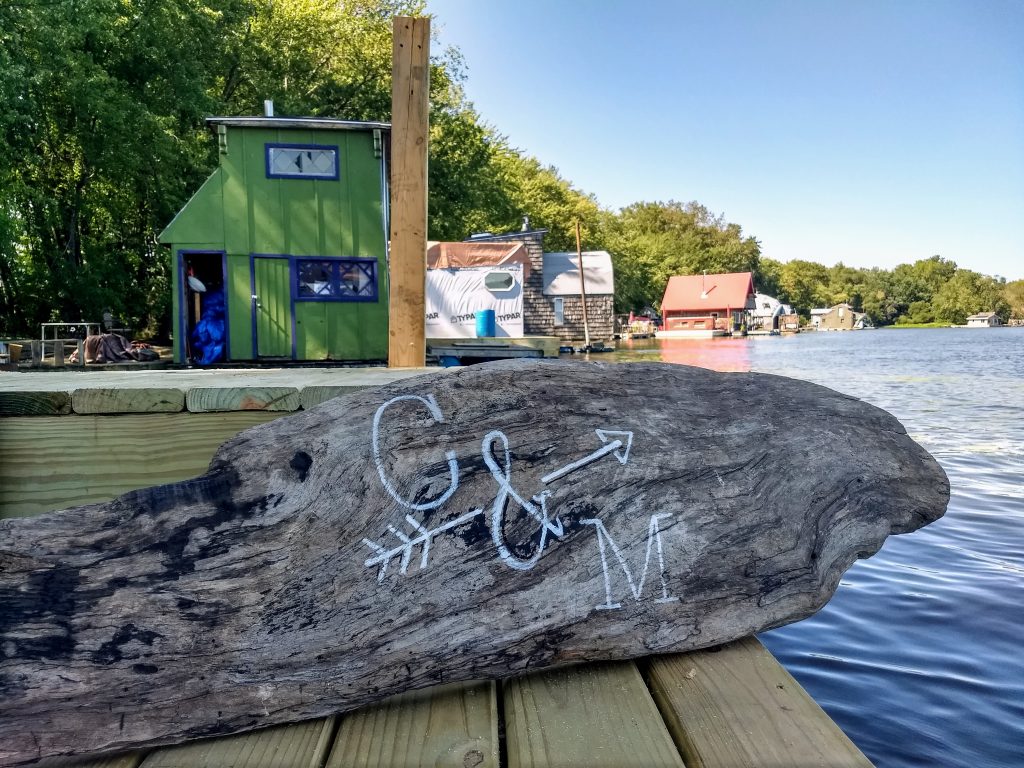