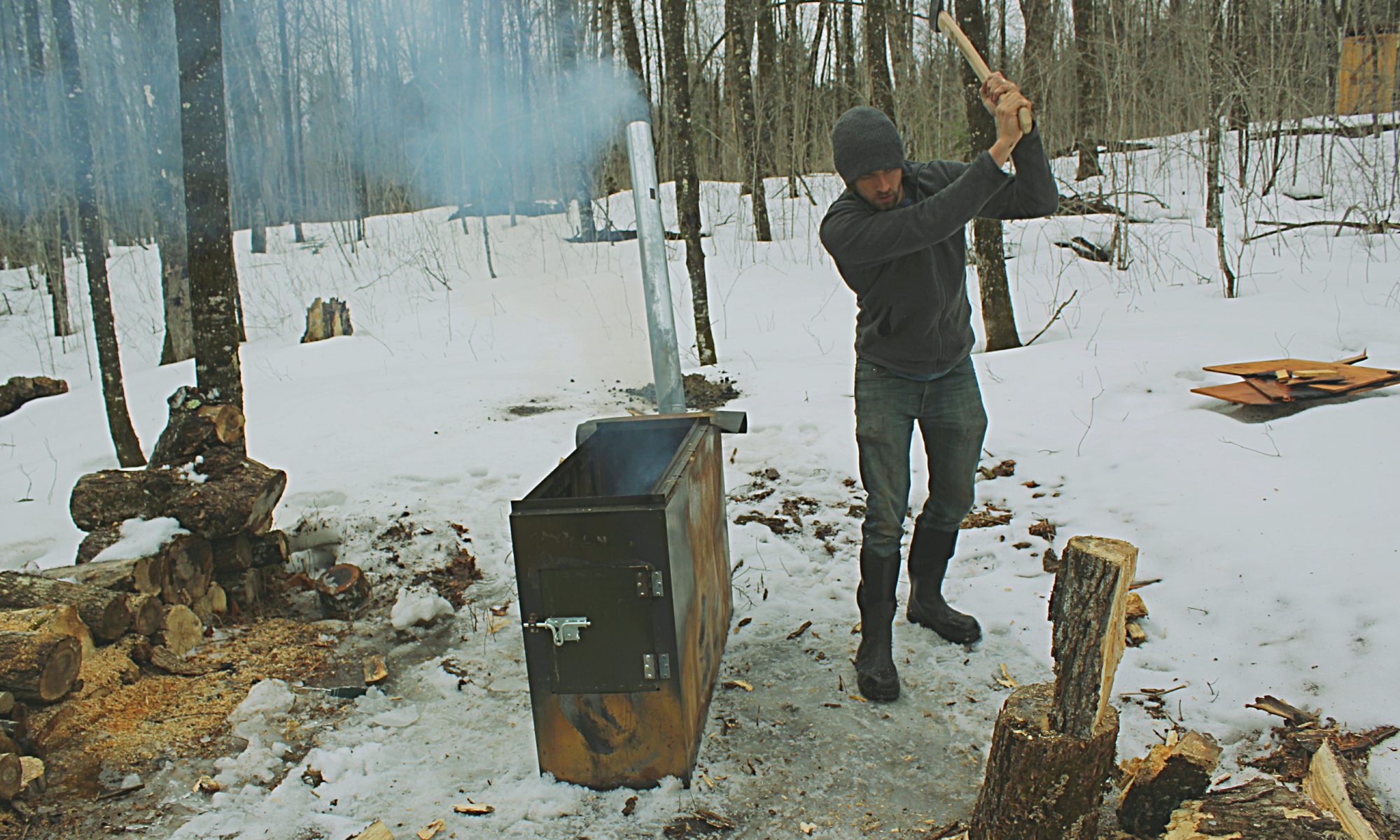 From Tree To Table 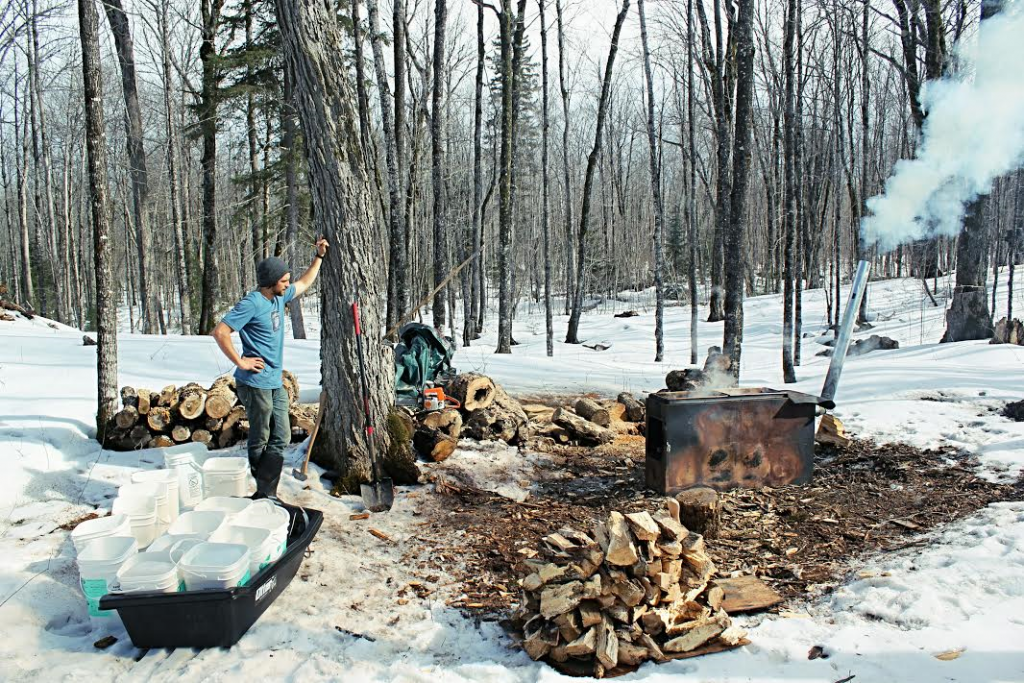 Maple Syrup. Nature’s sweet, sweet nectar. While looking to buy land, Michael and I looked for two things – water and woods (are you seeing a theme here?). Fortunately, we found both in The Northern Post, our 40 acre slice of heaven in Two Harbors, MN. In the spirit of syrup, let’s talk woods. Minnesota’s most northern woods is unique in that it is primarily coniferous (cone-bearing). The spruces, pines, and cedars maintain their green and hold mounds of snow through the winter; a welcome contrast to the deciduous (sheds it’s leaves annually) North American woods to the south of us. Nestled at the south stoop of the Superior National Forest, our Northern Post grows a blend of coniferous and deciduous trees leaving us wanting for nothing. While we honor the green conifers through the long winter, it is the maples that rule the spring. With sweet sap coursing through her veins as the frozen days thaw, Mother Maple is gracious in sharing her yield. 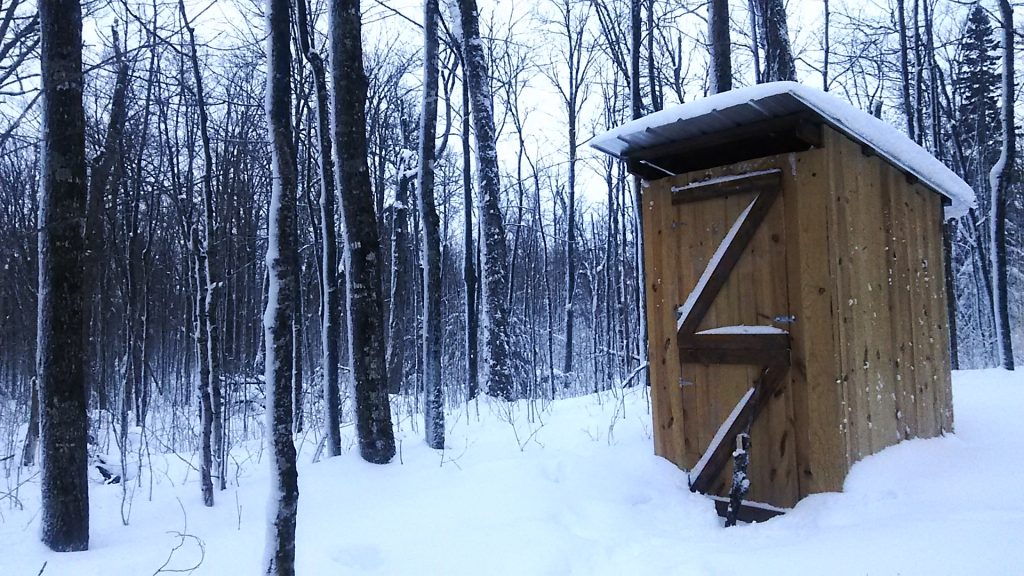 In late January, we began the tapping. With 30 inches of snow accumulated and no leaves on the trees to assist with identification, Michael and his younger brothers battled the elements to find what they believed to be 70 qualified maples. With the taps in, we looked forward to the spring thaw and really had no idea what to expect. 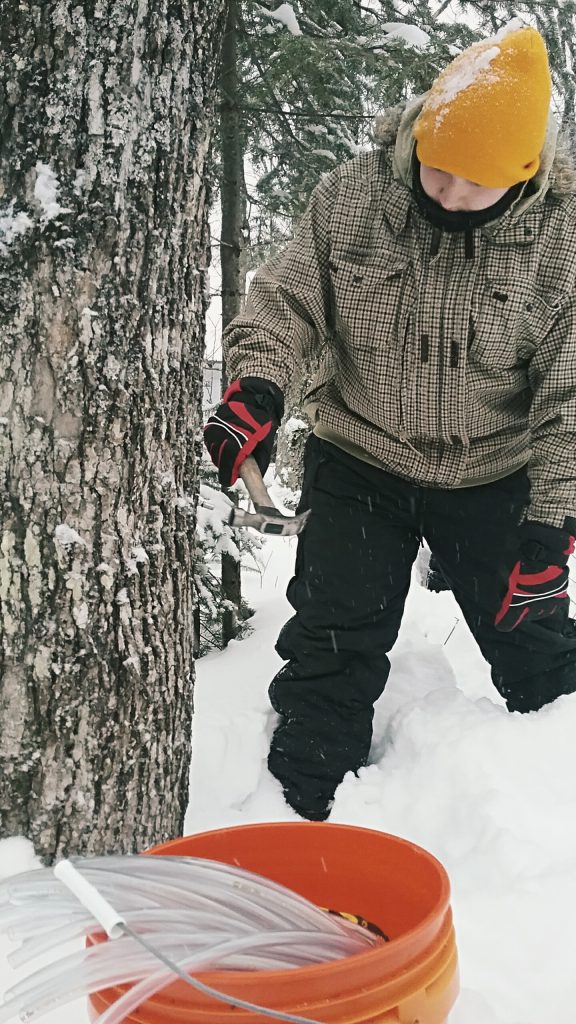 The thaw comes fast and unexpectedly and while I am home on the boat waiting for my sister to birth our first nephew, Michael was left to the land to conquer the sap of 70 trees all by his lonesome. At this point, since Michael, along with the help of his brothers, Christian and Cameron, did 96% of the work (my 4 percent comes from moral support and hauling in the over 70 pails that week before), I will transcribe his tale of tapping and sapping… 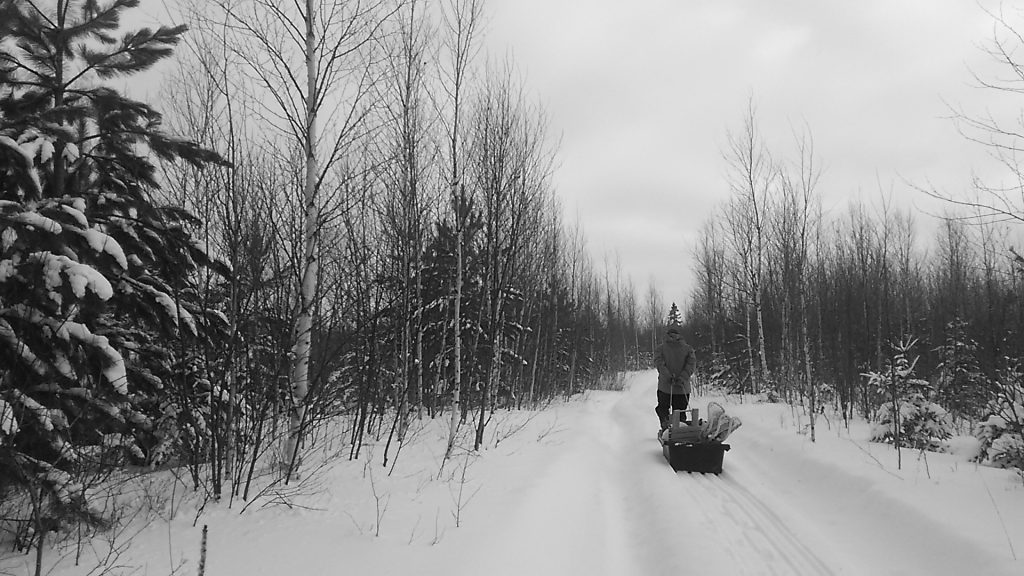 First, Michael purchased 75 stainless steel taps online. Next, we needed a maple syrup evaporator. I’m sure these things are for sale somewhere but in true Michael fashion, he found his own way. He started where all dreamers start: Craigslist. This is where he came across a four drawer filing cabinet for $5. The next step in following a dream: find a friend that’s crazy enough to go there with you. In this venture, Michael found Sam. To begin the transformation, the drawers were removed from the cabinet and the cabinet was laid on its back. Catering pans were needed to fit the openings that once held the drawers. Sam and Michael took a road trip around the city to find these. They found that no place would sell them to you unless you owned a restaurant. No problem, they’ll just play the part of restaurant owners… they thought this seemed easy enough and to the restaurant supply store they went. After getting stopped at the front for a “restaurant ID”, they were caught in a pickle. They were booted out the door without the desired catering pans. While this would deter most, Sam and Michael quickly found an unlocked back door. Michael reports that this worked out great until he got to the cash register and was again asked for this “restaurant ID”. With the catering pans in tow, it was not the time to give up and go home. Michael explained to them that he was new to the restaurant business and did not yet have an ID; he added that he did not want to disappoint his boss and asked that they please let him make this purchase. They let him through on a guest account, and they escaped with the prize! At Home Depot, they uneventfully purchased the hinges for a door on one end and a chimney for the other end. After two hours of labor and a cup of sheet metal screws, they had created the Frankenstein evaporator. 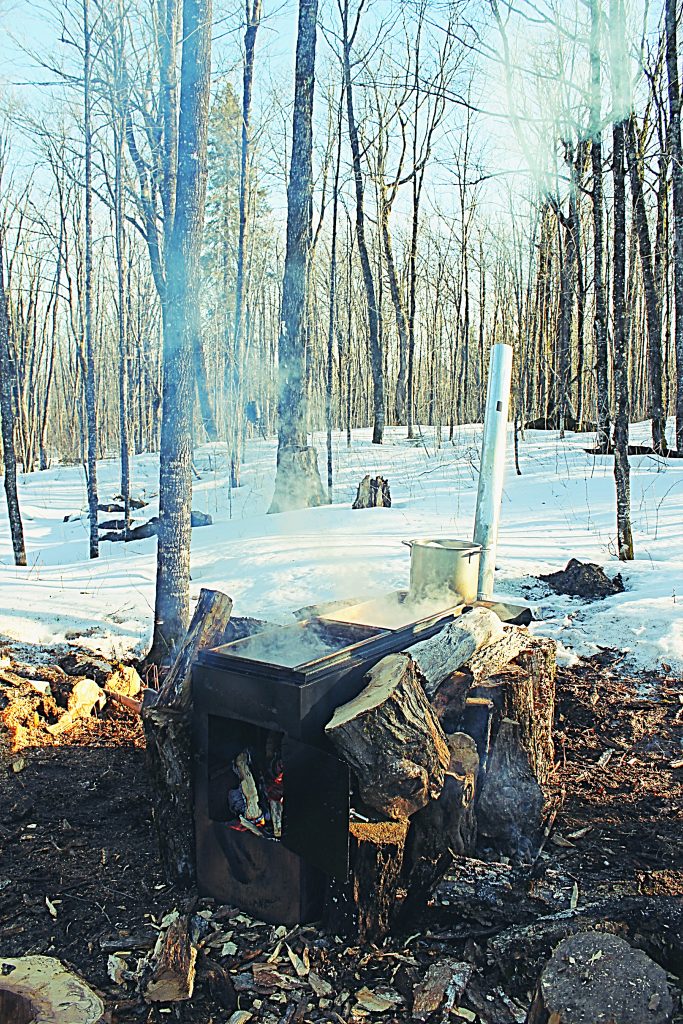 With the taps purchased and the Frankenstein evaporator ready for its debut, it was time to tap the trees. Michael reports that it is a simple process provided you have identified your trees whilst the leaves are on. This is something that slipped through the cracks of his early fall to do list. After a couple hours of hiking through waist deep snow with a “Trees of Minnesota” book and a pdf download of “making maple syrup”, Michael felt he had done enough research. He ditched the books and got out the drill. To tap the tree, he drilled a two inch hole at an upward angle to allow the sap to flow down and out and gently tapped in the “spile” (another name for the tap if you really want to sound cool). You then fit a tube around the spile and put down a bucket with a secure cover that has a hole drilled in it for the tube to run through. We used five gallon buckets; another Craigslist purchase for 80 cents a bucket. 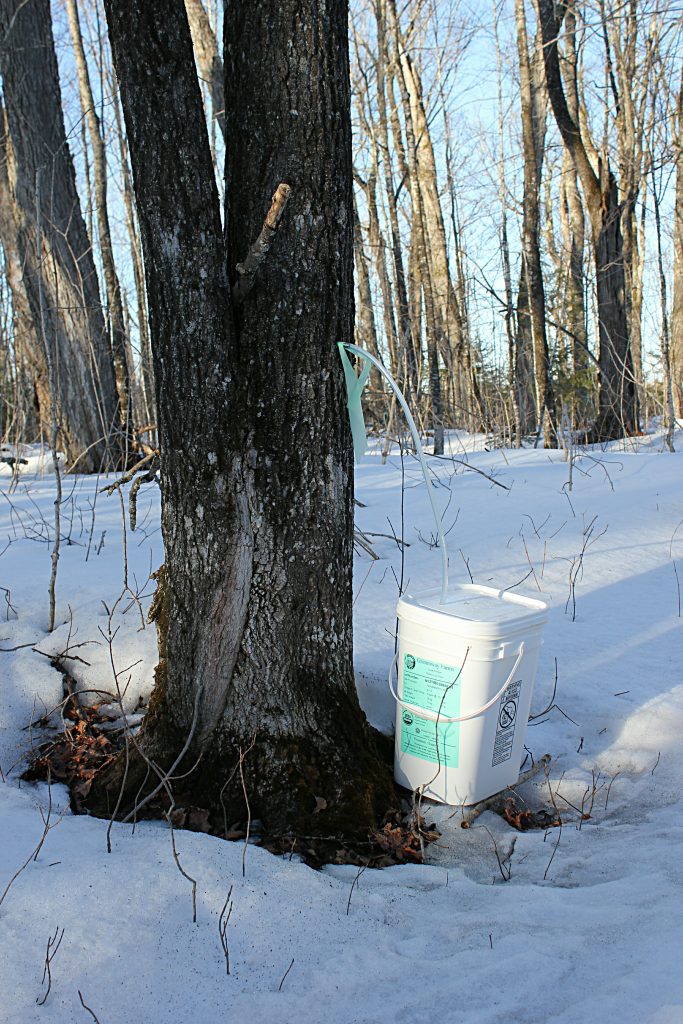 Now, we wait for Mother Nature to do her thing. The sap starts to flow when day temperatures are above freezing but night temps stay below. While we initially knew nothing about what trees to tap, we found out that you can tap any maple (although it is the sugar maple that has the highest sugar content) that is at least 10 inches in diameter three feet above the ground. 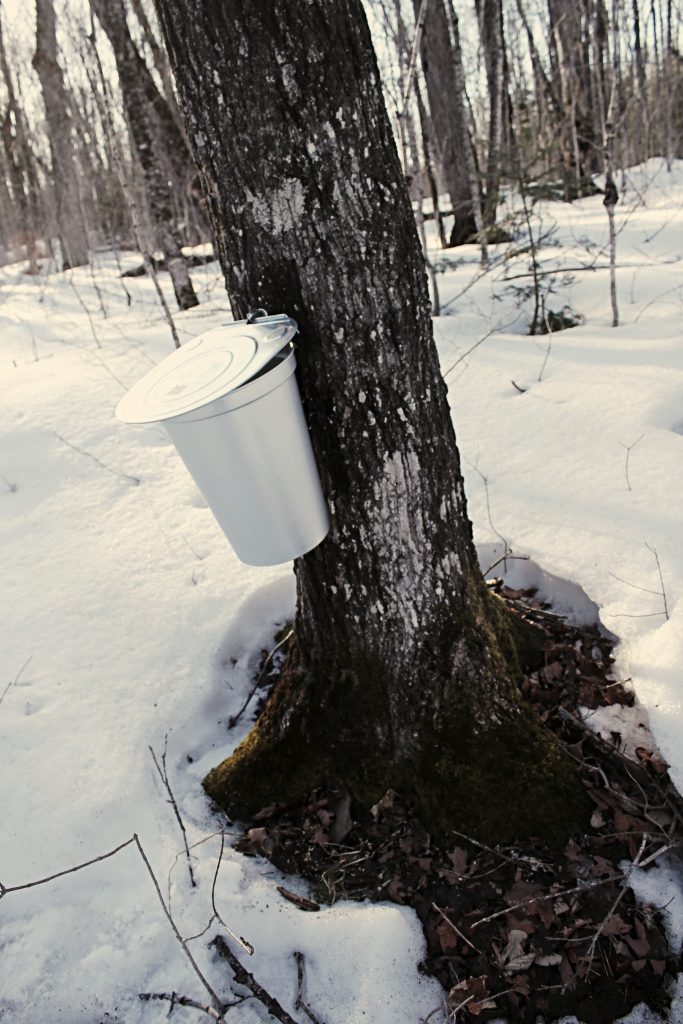 While everything we read about sap collection advised to collect sap daily or as frequently as possible, we could only collect weekly at times and found no change in taste with this timeframe. With 70 trees to gather from, the best advice we can give is to bring a friend. 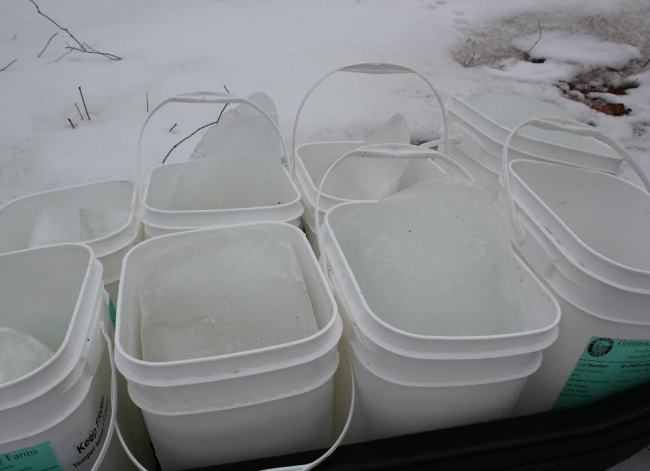 Something you may not know is that the sap to syrup ratio is 40:1; for 40 gallons of sap, we get one gallon of syrup. This translates to the ultimate test of patience, and evaporating is where it all goes down (or up if I’m being literal). The evaporation phase is when Frankenstein gets to really show his stuff. Make sure you have stacks of dry wood; you’re going to need it. 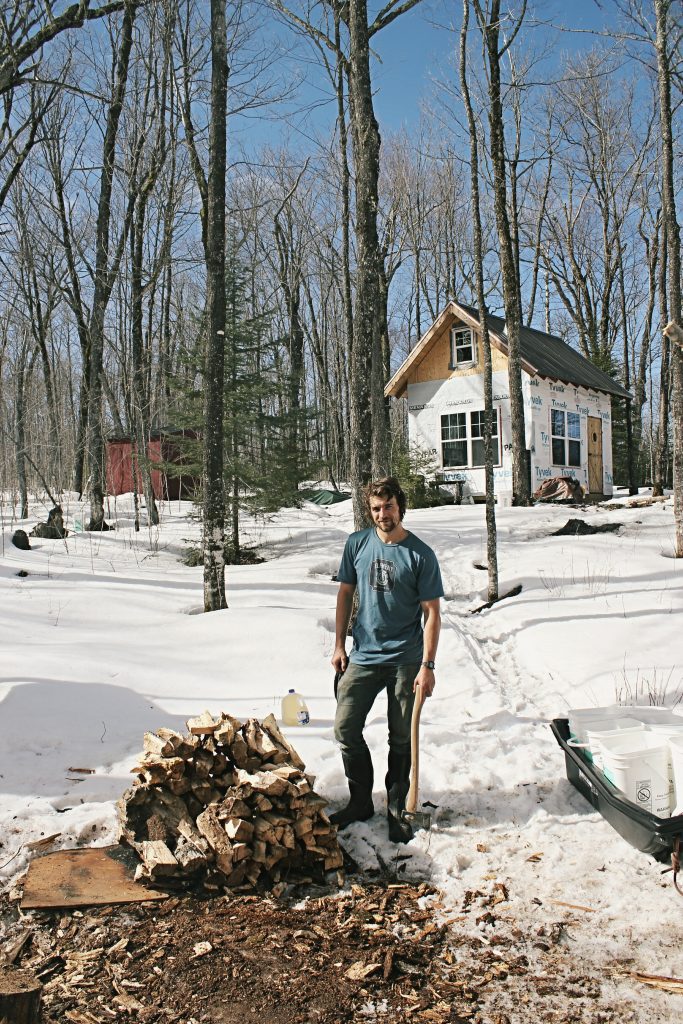 The ceremonial evaporation begins with the lighting… maybe a cup of lighter fluid on some small branches; whatever feels right. It’s nice to have a long evaporator like ours because we spent little time cutting our wood to length. 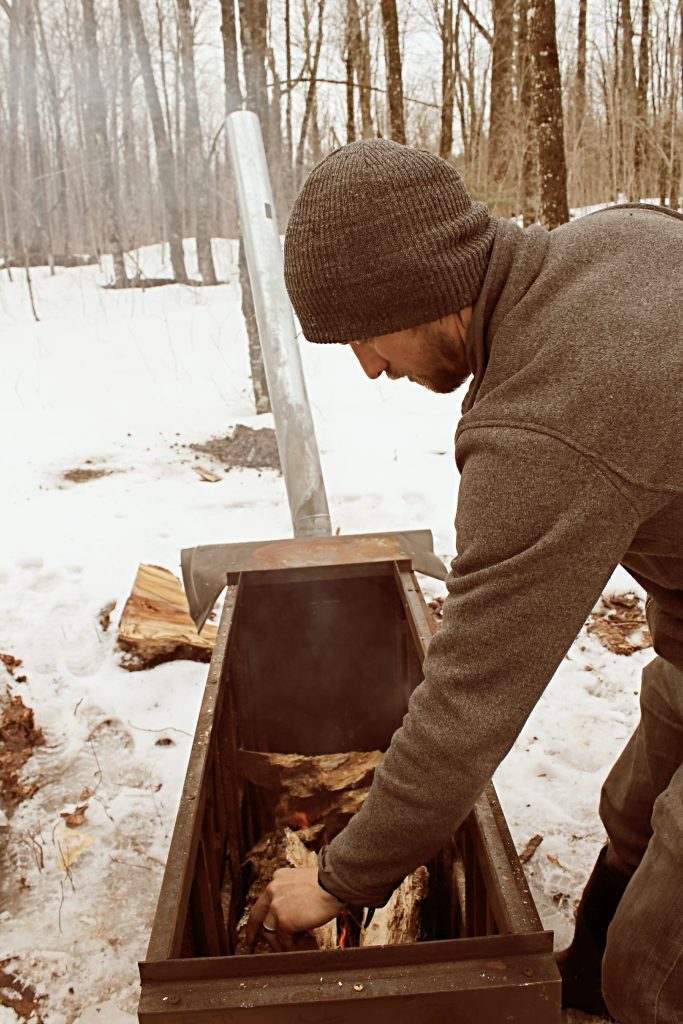 Once the fire gets rolling, on go those pans that Michael and Sam almost became criminal over. Fill the pans with about 4 inches of sap to start and monitor closely to prevent a boil over. You can control the temp by adding cold sap or by opening and closing the end door to control the oxygen flow. 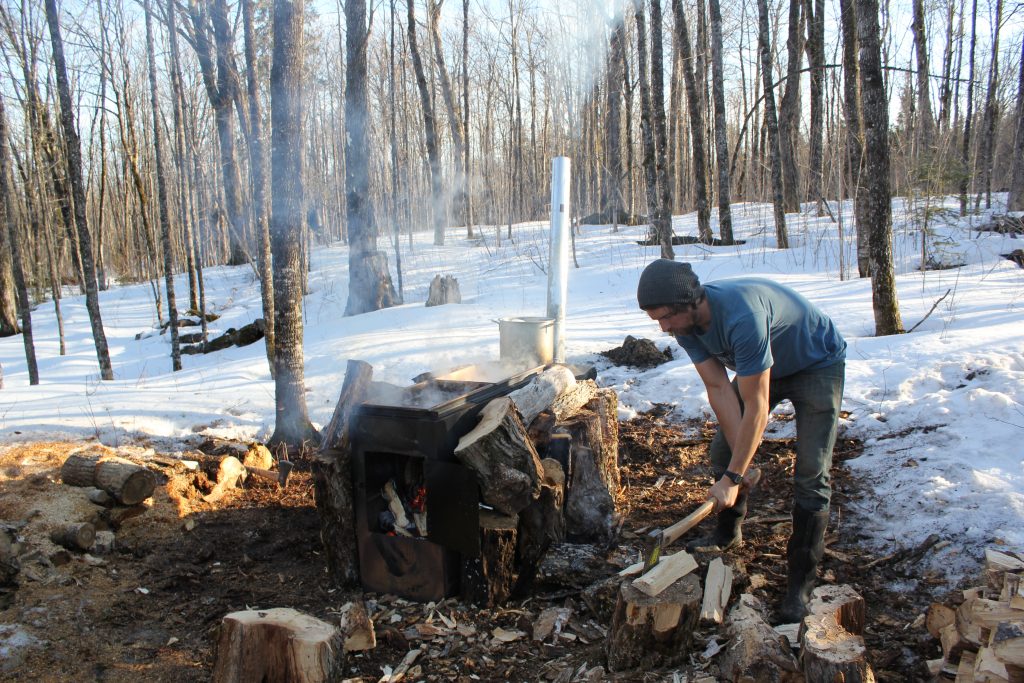 On average, we were able to boil down three gallons of sap per hour. Our longest evaporation of 110 gallons took just over 30 hours. And yes, this means taking shifts through the night to go out and stoke the fire. Unless you saw a very scary looking wolf on your trail cam the night before, then it’s logical to insist on “maybe we should just do it together”… that was Michael as much as me by the way. 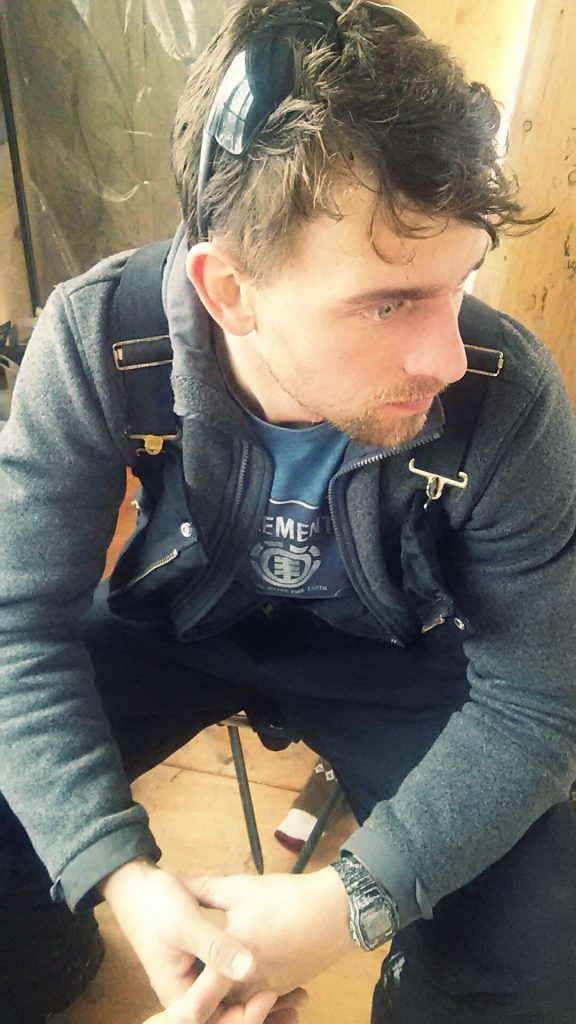 When the sap gets close to that 40:1 ratio and appears brown in color, it has been over a full of day of feeding the Frankenstein. At this point, we combine the pans and finish the cook on our propane camp stove; it’s a bit more controlled this way. As it cooks on the proprane, we keep checking it to see how much it has thickened until the desired viscosity is reached. I’m sure the real deal syrup makers would tell you to check its sugar content, or “Brix” (unit for measuring sugar density). They say that a Brix of 66° is ideal. With my Norwegian heritage carrying down a strong gene for sweets, I like to think my taste test for Brix is on point. So as soon as it looks delicious, I take the liberties and consume a spoonful. If it makes me want to whip up some pancakes now, then 66° Brix it must be. I hold off on making pancakes because I know we must pour the steaming sap through a fine weave strainer and this takes optimal concentration. Our fine weave strainer of choice is a clean t-shirt. 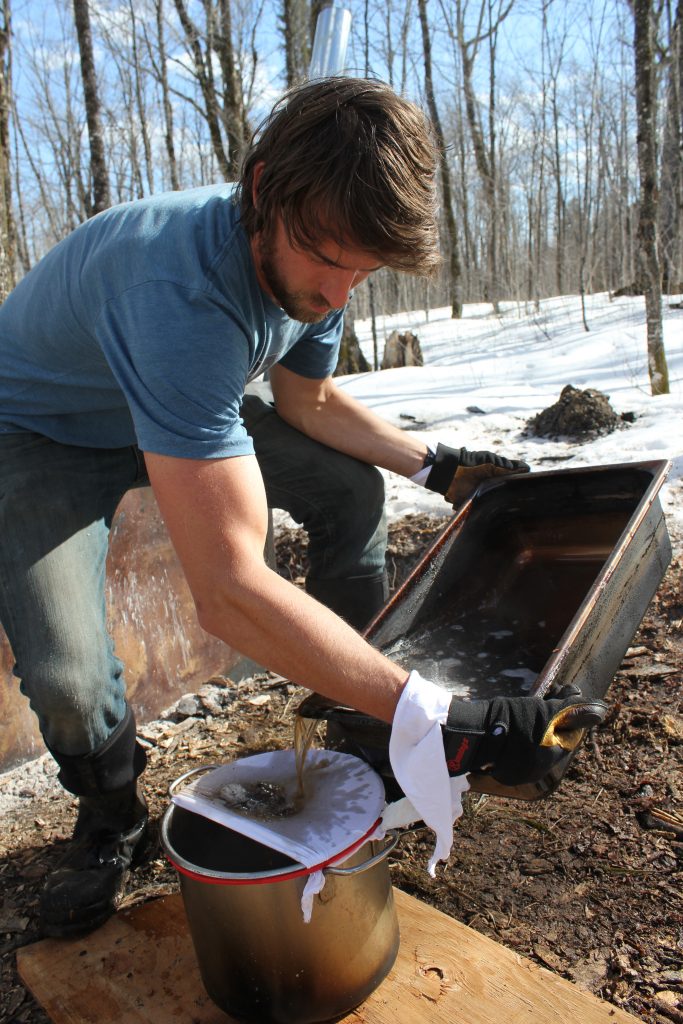 After the strain, we want to cool the syrup as quickly as possible. Michael’s preferred cooling method is placing the hot pan in a shallow part of our 30 degree stream as the thermal conductivity of water is 30 times than that of air. I’m on edge the whole time as I imagine the hard earned, finished syrup getting washed away with the waters and finding its way to Gooseberry Falls by late afternoon. Michael assures me that it’s secure and I don’t have to sit at the shore and stare for 30 minutes. 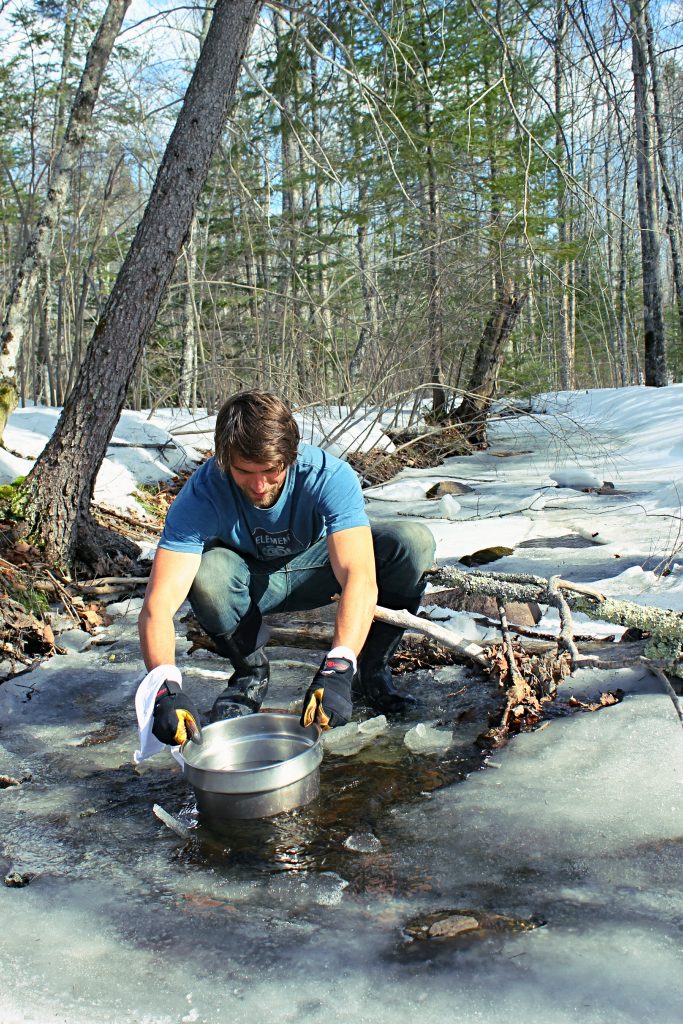 After the syrup is cool and safely out of the stream, it’s time to hit the bottle. 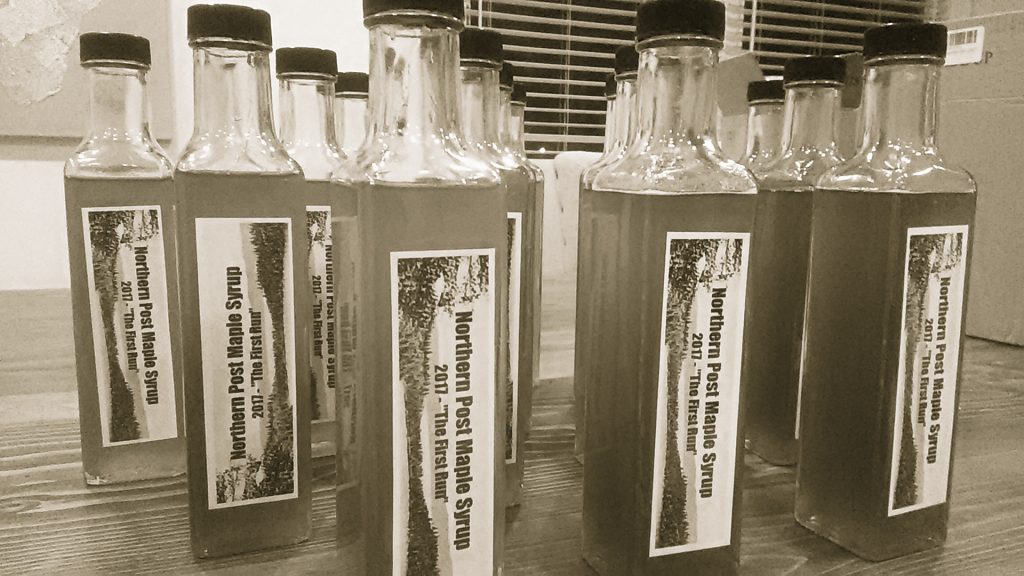 This is the best part. Enjoy! Some of my favorite uses so far: slathered over homemade buckwheat pancakes, used to caramelize cashews, and added to plain yogurt or kefir. We have ambitions to make a batch of kombucha with it, so stay tuned. But the most enjoyable part is spreading the love! Everything is sweetest when shared… ain’t that the truth. 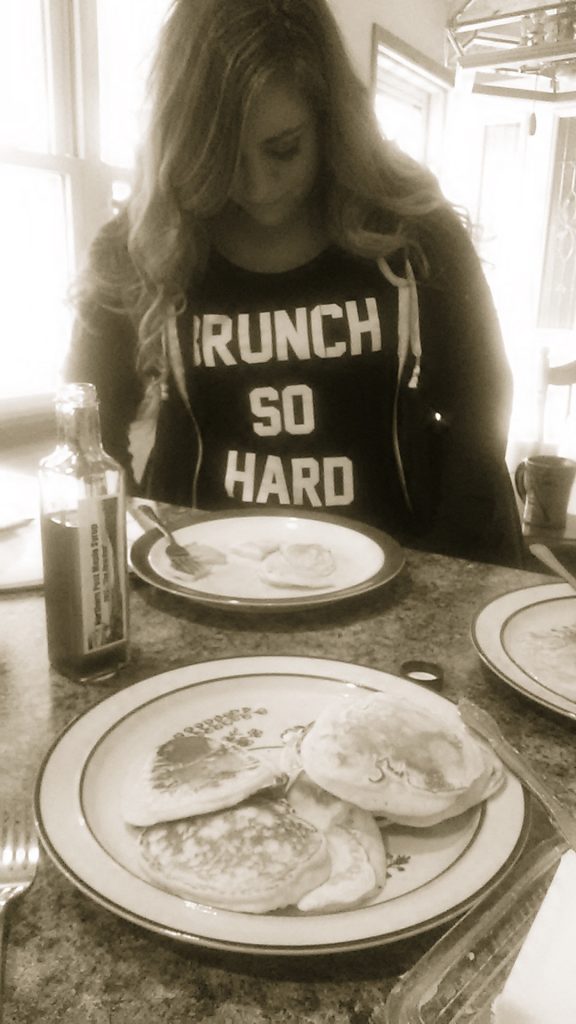